Yeezy History - Why is it so Popular and Expensive?

Yeezy's are one of the most popular, expensive and hyped pairs of sneakers that sell faster than hot cakes. But have you ever stopped and wondered how Adidas rakes in millions by selling just one category of shoes? If so, I'll tell you the exact reasons why this sneaker has been so popular and why it seems there will be no stopping it in the next few decades.

If you want to learn marketing, you can take lessons from Kayne West. He turned himself into a brand no one can resist. Yeezys were born out of his partnership with Adidas. He first agreed to design a sneaker for them in 2006, but it didn't happen. In 2006, he designed first for Bathing Ape, Louis Vuitton, and Nike. In 2015, he collaborated with Adidas again as Nike had refused to offer him royalties, but Adidas readily agreed to the same.

Fans waited with held breaths for at least a year before the Yeezys made their first appearance. It was in February 2015 that Yeezy's had their debut. As expected the event was graced by the presence of celebrities like Diddy, Rihanna, and Kim Kardashian. Since that day, there has been no looking back for Yeezys as they are reaching new heights of fame every day.

Why is Yeezy so Popular? 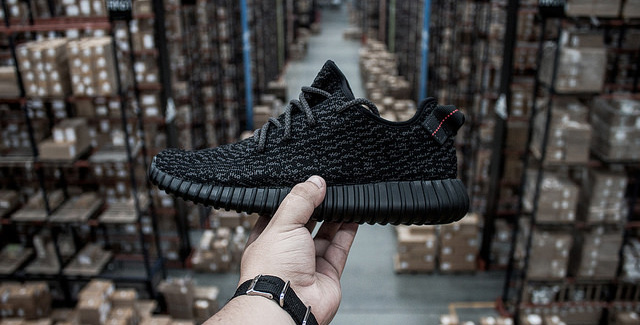 Yes, I know, you might be thinking why Yeezy is a big deal when there are so many cool sneakers out there. Well, here are the following reasons why:

- The Kayne Power: Yes, believe it or not, Kayne West has a huge fan following, and he's friends with people like Justin Bieber, Rihanna, the Kardashians and many others who have their huge fan base as well.
- Self-Promotion: Celebrities, especially Kim and Kayne often wear Yeezys in their personal and professional lives. As their pictures are bombarded all over the media, people stay hooked on the Yeezys.
- Social Media Power: You have to give credit to social media strategies of Kayne as well as the Adidas because they use social media quite effectively to keep the craze going. Releasing previews of new products is a fine example when you see how many likes a preview gets.
- High Resell Value: According to my estimate, about half of the people buy Yeezys just to resell them. They are a hot commodity in the resell market, so the craze for these sneakers rarely dies. People have made millions by just reselling Yeezys.
- Comfort: Though it's a minor plus, it's something to be acknowledged. Yeezys are extremely comfortable, light and have a broad base which is why people flash them for years!

Why is Yeezy so Expensive?

The main reason for Yeezy's popularity is the fame acquired by Kayne West and his creativity. But the simple fact is demand and supply play a major role here. This is a brilliant strategy by Adidas. They make only a limited number of products so that the thirst to acquire a Yeezy never dies. When 100, 000 people want a Yeezy, they create just 5,000 to keep the hype going.

If, let's assume Adidas decided to create an unlimited supply of all the Yeezys, would they be so popular and so in demand? Of course not. It is the human nature to seek things that are exclusive and hard to get. When everyone has it, we no longer need it. Due to this limited supply and extreme demand/hyped, the prices for Yeezy are expensive especially on the resale market where resellers wants to make a nice profit.

Yeezy have released various clothing for men and women such as shirts, sweatpants and jackets. However, it's still not as popular and hyped as Yeezy sneakers.

In contrast, Yeezy footwear generated more demand than the wildest expectations of most of us. Yeezys are just like any other pair of sneakers but for their unique colors and designs. In most cases, one model of Yeezy is launched and its success decides whether the same model would be relaunched in different colors or styles or not. If the previous model is a hit, the probability is high the next one would be a bigger hit (because only a limited number of shoes are released). My Yeezy Releases page covers all Yeezy releases and models.

There you have it. I hope I covered the essentials in this brief history of one of the worlds' most talked about sneakers. If I missed a few or if you noticed any inaccurate information please do let me know.

Hey there! My name is Josh and I'm a sneakerhead. I also love to blog on my spare time! I made this website as a guide/resource for all your Yeezy related needs (Yeezy is one my favorite sneaker brand!). You can contact me if you need any help or feedback.